A GRIP ON SPORTS • It has come to this: The Mariners need a miracle and the Seahawks were raving about their punter. This wasn’t the scenario we thought we would see back in June, was it? Read on.

• As summer fades slowly to autumn, the professional sports news in the Northwest seems to be getting a bit chilly itself.

The headline in today’s News Tribune told the Mariners’ tale: “Mariners in the playoffs? That would take a miracle.” Yes it would. With 19 games left, it would take a Colorado Rockies circa 2007 run. The M's would have to win 16 times to get to 95 wins and then hope the A's or Astros falter. The way this team has been hitting, pitching, defending and fighting the past few weeks that doesn’t seem possible. But it is baseball and strange things happen. Even to the M’s.

Usually, though, those strange things fall into the awful-to-bad category for them. Like their No. 3 hitter and starting second baseman lost for 80 games thanks to high blood pressure. Or using a masking agent. Whatever.

Or the best pitcher in the starting rotation having his back seize up in a July game versus the Yankees, starting a downward slide that has yet to be arrested. Or their catcher taking his hitting woes out into the field with him every night. Or their only homegrown star deciding he is a left-handed-hitting power freak and losing his stroke.

But good miracles do happen. Just not in Seattle.

Well, not with the Mariners. You watch Michael Dickson punt and your faith is restored. The ball goes up and up and up, floating there, until it finally falls to earth somewhere inside the 20-yard line. They are so impressive, even Jon Ryan, the Hawks’ punter of record for years and years, had no quibble when the Hawks said goodbye, even if his next stop was Buffalo. 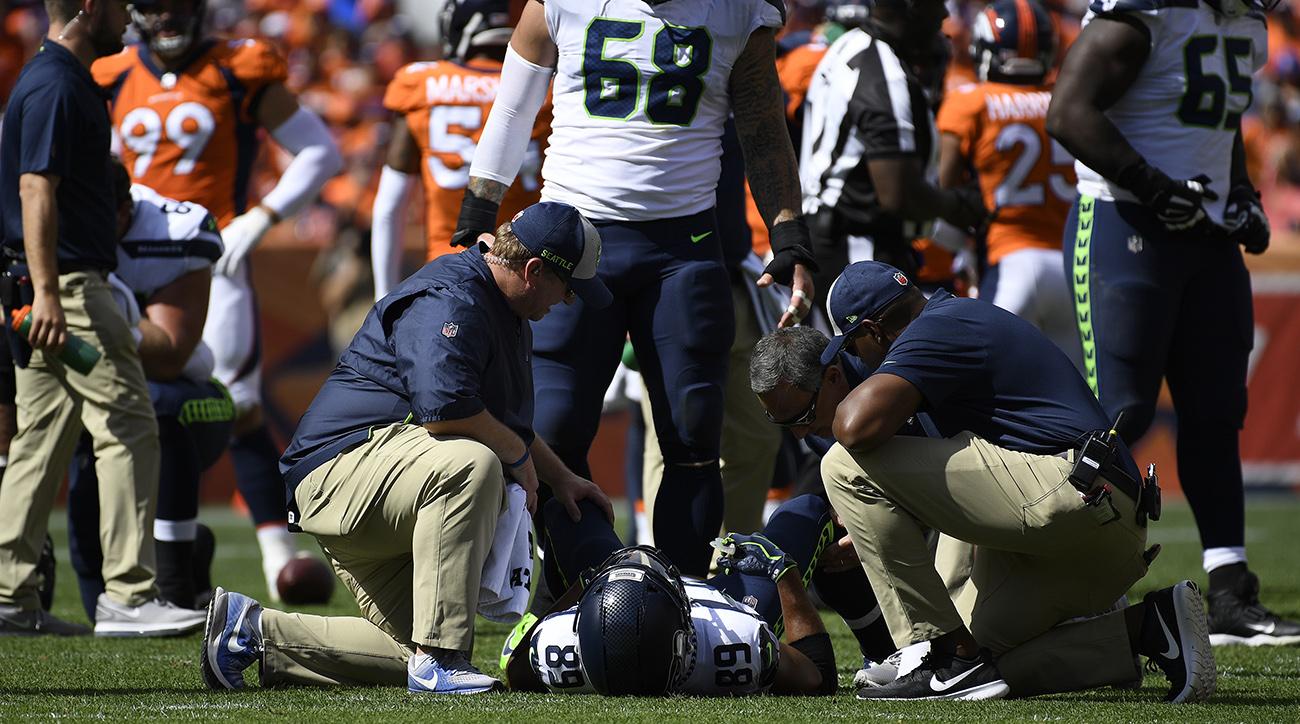 But, to paraphrase Pete Carroll, goodness gracious. We are excited about a punter? Isn’t that the last player on the field a pro football fan should be excited about? Heck, isn’t it better if he never gets to play?

Oh sure, a great punter is a weapon. And an asset to the defense. But if the quarterback and the running backs and the offensive linemen and the receivers are doing their jobs, the punter stands next to the kicker and only runs out when he needs to hold. That’s when it’s great to be excited about the punter, when he only needs his right leg for kneeling.

Speaking of legs and knees, Doug Baldwin has a grade 2 partial MCL tear in his right knee. If you are wondering, that is not the knee that was giving him problems in the preseason.

The prognosis for Baldwin’s injury? He’s out for a month, maybe more.

Unless there is a miracle.

WSU: There is good news. The Cougars have been proficient at converting fourth-down plays. The bad news? Third down efficiency has been down right awful. That doesn’t sit well with Mike Leach. Theo Lawson kicks off his coverage with a story that looks at the numbers behind that and how Washington State plans to improve it. … A tall, lanky high school offensive lineman has committed to WSU. Theo has more on Walla Walla’s Patrick Utschinski. … Theo also has his first look at Eastern Washington and Leach’s interest in the Eagles’ red turf.

Elsewhere in the Pac-12, this all-time Pac-10/12 team from Jon Wilner will probably raise some hackles from Cougar fans. I’m sure they will mention Rien Long, Keith Millard and Mike Utley as overlooked players. Jason Hansen was mentioned, however. … Which team is the best in the conference right now? … Washington needs to get its offense going, especially the running game, if only to shut some people up. I have some thoughts on that below. … It’s obvious San Jose State is in over its head against Oregon this week. … Oregon State hasn’t been good in the third quarter. … Colorado has been forced to make a change at punter. … USC will be without a starting safety for a while. … When will UCLA’s starting quarterback be back? … Herm Edwards’ new beginning at Arizona State heads back to one of his old haunts. … Any problem for Khalil Tate is a problem for Arizona.

EWU: With Washington State on tap for Saturday evening, Ryan Collingwood has everything Leach said about the Eagles at his Monday press conference. … Larry Weir’s latest Press Box pod looks back the college football weekend. … Around the Big Sky, Montana State coach Jeff Choate got back from Saturday’s loss and went straight to the hospital for an appendectomy. That’s not fun. … Northern Colorado is off to a slow start. … So is Portland State, but that should change. … Montana is headed on the road for the first time.

Indians: Speaking of miracles, the Indians need a minor one. After Monday night’s 4-0 loss to Eugene, Spokane will need to sweep three games on the road to win the Northwest League title.

Seahawks: There is little doubt this will be an up-and-down season, which is OK, I guess. Counting the four preseason losses, it’s only been down so far. So there has to be some ups, right? … There are many reasons why the Hawks didn’t win, but one play was huge. … Up next are the Bears. … Carroll spoke yesterday.

Mariners: Yes, it would take a miracle.

• We linked Jon Wilner’s story about a tweet from ESPN’s Mark Jones in the Pac-12 section and we wanted to share some thoughts. Specifically, Jones tweeted after the Auburn loss “Washington took one one on the chin. Where’s Montana?” Besides the obvious typo, there is one other aspect of this tweet that isn’t being emphasized enough. Jones obviously watched the game. He couldn’t have missed the flagrant helmet-to-chin hit on quarterback Jake Browning. The non-call was crucial in the outcome. And Jones seems to be referring to it in his tweet, trying to sound witty with the play on words. That’s unacceptable. That is just the type of hit football is trying to get away from, as the evidence is becoming clear they cause permanent damage. To make light of it at any time is inappropriate but especially so in this type of circumstance. Until later …